Auditions for Playhouse 2000 shows are roughly 8-12 weeks prior to the opening weekend of the show. Everyone is invited to audition, but we do our best to work very professionally. Actors should expect approximately 6 weeks of rehearsals. A full rehearsal schedule is typically available after auditions.  Auditioners for each show are only expected to attend one audition session unless specially informed about call-backs.

In most cases, no advance preparation is necessary, and you only need to attend one of the two audition days.
Advance copies of most scripts can be checked out for two days (seriously, two!) at P2K’s VK Garage Theater office, 305 Washington Street.
AUDITIONS FOR THE 2021 PLAYHOUSE 2000 SEASON

For Such a Time As This

With Book and Lyrics by Rob Ward

And Music by Lew King

We are very excited to take the next step in the life of a new musical created by two Kerrville residents.

For Such A Time As This, in the same vein as shows like “Cotton Patch Gospel,” “Jesus Christ Superstar” and “Joseph and the Amazing Technicolor Dreamcoat,” uses a variety of musical styles and a mix of pathos and humor to relate the biblical tale of Esther, the slave who would become queen and hero to her people.

The show received a “workshop” with a modified public performance during the Covid times.  Now, we’re looking to give it a full production with sets, lights, a full orchestra, beautiful costumes, and a large mixed cast.  Everyone is welcome, and the demands of the script and score are well within reach.

Esther (plays 18 to 35):  Soprano.  Lead female role. She is a Jewish captive chosen by the King himself to be his Queen.

King Ahasuerus (aka, King Aha) (plays 25 to 40): Baritone.  Lead Male role. He is a dominant, but sensitive ruler. He and Esther fall in love.

Mordecai (plays 25 to 50): Baritone. Older male cousin and guardian of Esther. He adopted Esther after her parents died.

Shecky  and Morty (any age):  General Voice. A pair of scatter-brained henchmen for Haman.

Biztha (plays 30’s to 60’s):  Any male voice.  King’s chief noble and counsel. Along with other nobles he hangs with the King and ‘raps’ his entrances.

Mehuman (plays 20’s to 50’s):  Any male voice. Head palace noble. Along with other nobles he hangs with the King and ‘raps’ his entrances.

Hegai (plays 20’s to 50’s): Any male voice. Head palace noble. Along with other nobles he hangs with the King and ‘raps’ his entrances.

Bigthan and Teresh (any adult age):  Baritone/Alto. Two traitors who plot to kill the king.  Will double as a townspersons.

Other Roles: There are other roles, not specifically listed here, that have speaking lines within choral numbers. (e.g., “Townsperson 1”)

Please prepare 32 bars of a song in the Broadway or pop style – or even from a hymnal – and bring sheet music with you.  An accompanist will be provided.

Volunteer Behind the Scenes

Playhouse 2000 has a vibrant and very active volunteer team. Volunteers are the backbone of the theater & can never be thanked enough for all of their hard work and time spent helping to make Playhouse 2000 sensational year after year. There are many opportunities to volunteer for the theater. 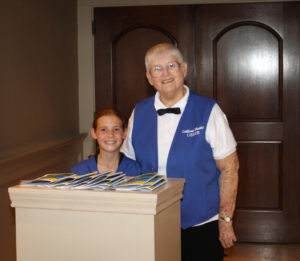 We have a wonderful team of volunteer ushers! Call the Playhouse office to see when you can usher for a Playhouse 2000 or Cailloux Theater production! Contact Susan at (830) 896-9393 ext. 302 or susan@caillouxtheater.com to get on the volunteer usher list. 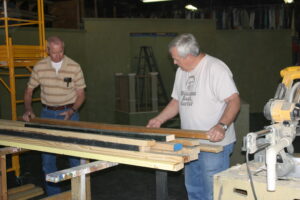 Tuesdays, Wednesdays and Thursdays are the volunteer work days for the Cailloux. This includes building and painting scenery, hanging lights, pulling and making props, pulling and/or creating costumes, etc.  Call Nick at (830) 896-9393 ext. 305 or nick@caillouxtheater.com for more information.

We also occasionally call on volunteers for help with folding programs, stuffing envelopes, and preparing mailers. We also prepare for the nightly productions. This is a great day for someone to volunteer who maybe just had surgery or isn’t able to stand for very long.  Contact Amy at (830) 896-9393 ext. 304 or amy@playhouse2000.com to get on the volunteer contact list.